Due to the ongoing public health safety concerns and guidance from state government, the 56th running of HomeStreet Bank San Diego Bayfair on Mission Bay set for September 18-20 has been postponed until 2021.

The Board of Governors voted unanimously Tuesday to reschedule Bayfair and America’s Finest BBQ Festival for September 17-19, 2021. It is the first time that San Diego Bayfair hasn’t hosted a race since 1973.

San Diego is traditionally the last race of the season for H1 Unlimited and Grand Prix America hydroplane tours. Both tours have not raced this year because of event cancellations tied to the pandemic.

Bayfair had delayed the start of RV space registration and ticket sales awaiting on greater guidance from local and county officials. The event is staged in Mission Bay Park, which is controlled by the City of San Diego.

“We look forward to getting together again with friends and family in September 2021, in the meantime please stay safe and healthy,” Davies said.

Bayfair is one of San Diego’s largest beach festivals with more than 70,000 people annually drawn to Mission Bay for three days of boat racing, barbecue and craft beer festival, and family fun activities.

After Saturday’s racing, Shane said, “It feels great to win my sixth championship, we are going to stay clean during tomorrow’s two sets of heats and go into the final and lay it all on the line.” 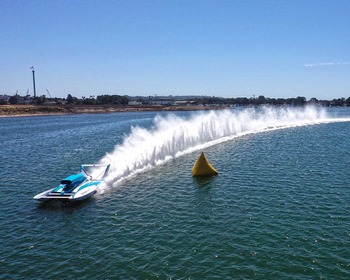 “We are going to race smart leading up to the final of the HomeStreet Bank Cup and through everything we got at it,” Shane said.

Shane said he has to stay away from the saltwater tossed in the air from the other race boats, keeping the engine from digesting the salt that could lead to damage and “stay out of trouble.”

Shane biggest challenge of the day came from his teammate, Jeff Bernard, driver of the U-1918 “Oberto Super Salami” who nearly caught him at the finish of the four-lap heat.  Bernard finished a boat length behind Shane. Third place went to Jamie Nilsen, driving the U-11 “J&D’s presented by Reliable Diamond Tool.” Fourth place went to Canadian driver Bert Henderson in the “Spirit of Detroit.”

In the second heat of the day, J. Michael Kelly in the U-12 “Graham Trucking” made a parade out of the preliminary heat easily beating Bernard in the “Oberto Super Salami” and U-11 “J&D’s presented by Reliable Diamond Tool.” Corey Peabody driving the U-98 “Graham Trucking American Dream” failed to finish.

“We need to keep getting this boat going faster and faster,” Kelly said.

Kelly said they are going to try different things Sunday because he was unable to get good timing marks Saturday after his boat suffered steering issues during qualifying.

“The guys worked hard to find the issue which is nice, you want your steering to work when you are going 200 mph on the water,” Kelly said.

Kelly said he didn’t know exactly what went wrong with his steering other than it wasn’t right.

“I’m just the driver, I just turn the wheel and I knew something wasn’t right,” he said. “I explained it to my crew and they thankfully figured it out.”

San Diego, Calif.—September 4, 2019—HomeStreet Bank San Diego Bayfair presented by Davies Electric has something for the whole family when the event takes over Mission Bay, September 13-15. Whether the kids want to see the extreme Hydro-Flight Games or the parents are interested in barbecue and fast boats, Bayfair has you covered. 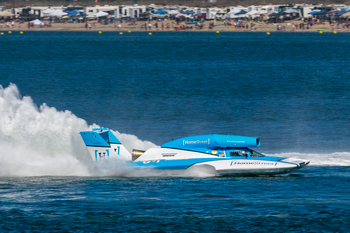 Over 70,000 spectators and RVers are expected to be part of the end-of-summer tradition as the family-friendly festival takes over East Vacation Island, Crown Point and Fiesta Island. Celebrating its 55th year, HomeStreet Bank San Diego Bayfair is one of California’s largest on-water events.

The newest addition to Bayfair is the Hydro-Flight Games, set for Friday-Sunday on Crown Point. More than 45 competitors from around the world will participate in the exhibition. It features Jetboard competitions, JetBike, JetPacks and a junior competition doing incredible tricks. Hydroflight competitions are popular overseas but there are few events in North America.

“This is a unique opportunity to see these world-class competitors right in your backyard,” Davies said. “They are incredible athletes who will put on a great show for the fans.”

Returning for the second year is the popular America’s Finest BBQ State Championship on Saturday, September 14. The competition will feature more than 50 teams firing up barbecues for the best pork, beef brisket, chicken and pulled pork. The championship event is sanctioned by the Kansas City BBQ Society.

Attendees can purchase food tokens to sample the food and learn from the best in the business on how to barbecue. Tickets to America’s Finest BBQ State Championship are $10; free for Bayfair fans with a 3-day Super Pass. The barbecue competition will have a beer garden and music with proceeds benefitting the San Diego Police Historical Association.

On-water activities are led by the H1 Unlimited hydroplanes, which is wrapping up its 2019 season in Mission Bay. Driver Andrew Tate is defending back-to-back Bill Muncey Cup victories in San Diego but expect Miss HomeStreet Bank driver Jimmy Shane to have a say before the weekend is over. Shane of Maple Valley, Washington, is expected to lock up the individual driver and team points championship in San Diego.

Fans who love big piston-power will want to catch the Grand Prix World Supercharged Hydroplanes as they’ll race throughout the weekend. This year the eight teams will be racing for the Secretary of the Navy Cup. The cup, which is on loan from the American Power Boat Association, was last contested in 1931.

“San Diego has such a proud military tradition, we wanted to honor the servicemen and servicewomen,” said Sam Cole, chairman of the Grand Prix World Supercharged Hydroplanes. “The fact the Secretary of the Navy Cup hasn’t been contested for nearly 90 years should be exciting for fans and the racers.”

Bayfair supports the military too by providing free admission to active military and reservists with current identification. Dependents receive 50 percent off their ticket and children under 12 are free.

Rounding out the on-water entertainment are several classes of amateur racing from the American Power Boat Association. The classes expected to participate include 1 Liters, Crackerbox, Stock Hydros, SST and Seabreachers.

Other activities at Bayfair include beer gardens, a large vendor area open to the public on East Vacation Island and activities for the kids. San Diego Bayfair also offers RV spaces to rent on Mission Bay, one of the few opportunities to stay overnight in Mission Bay Park. RV Packages include four nights and five days, plus tickets to the event.

Testing and qualifying with limited racing is on Friday, September 13. Heat races and championship races are on Saturday and Sunday. The Bill Muncey Cup for H1 Unlimited is Sunday afternoon, September 15.

“San Diego is one of the favorite destinations for boat-racing fans across the country,” Davies said. “We see families that attended as a child and are now bring their children and grandchildren to Bayfair. It speaks to how family oriented Bayfair is.”

Single-day tickets start at $25 and a three-day Super Pass is available for $45. Children under age 12 are free. For more information or to purchase advance tickets online, visit www.sandiegobayfair.org.